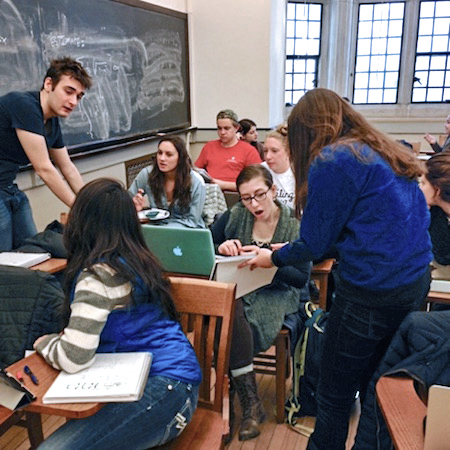 Rolf worked in partnership with Jennifer Frederick, Executive Director of the Center for Teaching and Learning, Pamela Schirmeister, Senior Associate Dean of Undergraduate Education, and Carl Hashimoto, Assistant Dean of Quantitative Reasoning and Science Education, to submit a proposal to the AAU in December 2016.

“Together we have identified three efforts that will benefit from the funds we receive from the AAU,” said Rolf. “Yale will create a peer advising system to support students in STEM departments with high enrollment rates and we will expand the Online Experiences for Yale Scholars (ONEXYS) program to cover more subjects. We will also create a network of partner institutions that have demonstrated interest in online bridge programs, like ONEXYS, which provides digital content and a discussion platform for incoming students to help them prepare for their freshman year.”

Yale is one of twelve AAU member campuses to receive a STEM Education Network Mini-Grant, a $10,000 award per year for the next two years. Yale’s Center for Teaching and Learning and the Yale College Dean’s Office will match the funding with an additional $26,000.

Rolf, the Shizuo Kakutani Lecturer of Mathematics at Yale, has illustrated his dedication to teaching excellence by spearheading the ONEXYS program and experimenting with a flipped classroom for Math 115. Rolf joined the Yale faculty in July 2012 after teaching at the United States Air Force Academy and the United States Military Academy at West Point.

“We would like to provide support to some of our departments with a large number of majors, where it’s more difficult to provide advising due to the number of students,” said Rolf as he explained the goal of the peer advising system. “Students-helping-students already works effectively in several forms here on Yale’s campus. We think that providing training to some students will increase the availability and the quality of the advising experiences for other students in larger departments.”

ONEXYS, a six-week online summer math program, combines content created by Rolf and his team with live discussions. Participating students connect with other students enrolled in the program and undergraduate coaches to discuss the content, quizzes, problem sets, and life at Yale to better prepare for their arrival on-campus. Rolf worked with the Center for Teaching and Learning, the Office of Undergraduate Admissions, and the Yale College Dean’s Office to develop the online bridge program to help students successfully transition to the rigors of Yale’s undergraduate curriculum.

In the summer of 2016, the program worked with 109 incoming undergraduates and 24 undergraduate mentors. The first two cohorts of students focused solely on mathematics, but the program was expanded last year with a piloted version for an introductory physics course. This pilot included students completing their first year of study at Yale and prepared them before they started Physics 170 in the fall.

“We’ve collected lots of data over the last three years about ONEXYS and we see gains in student understanding over the summer. This seems to persist as our early data suggests that students in ONEXYS see an increase in their GPA at the end of their first year at Yale compared to their peers who did not participate,” said Rolf. “We want to expand this effort to focus on students already on campus.”

Rolf has flipped his classroom with online videos that provide students with a basic understanding of the material prior to class. He confirms their understanding via online quizzes and then extends their understanding in class by working with the students to complete more difficult problem sets. Data shows that 64% of students think this approach is helpful to their learning and students in the flipped version of Math 115 have a better experience in later math courses.

In an effort to partner with other institutions to improve STEM education, Yale shared ONEXYS assets, including videos, quizzes, and math-in-context applications, with the University of Notre Dame and Carleton College last summer.

“This was a positive experience for us as well as Notre Dame and Carleton College,” said Rolf. “We are aware of growing interest in online bridge programs and Yale has successfully developed programs ahead of our peers and we want to take the first steps in creating a network of partners at interested institutions.”

According to Rolf, this will allow Yale to not only support the larger academic community but to also learn from partners as they adopt Yale’s approach and make it better. This will ultimately improve the Yale ONEXYS experience.

“Yale continues to pioneer new programs and evidenced-based pedagogy to improve STEM education on campus and at partner institutions,” said Frederick. “The Center for Teaching and Learning is home to several of these initiatives, including the Helmsley Postdoctoral Scholars and the evaluation team that supports the Summer Institutes on Scientific Teaching. We have supported Jim throughout the development of ONEXYS and his work with Math 115 and we will continue to support faculty as they think about their pedagogy.”

Learn more about Math 115, ONEXYS, and the Center for Teaching and Learning online.