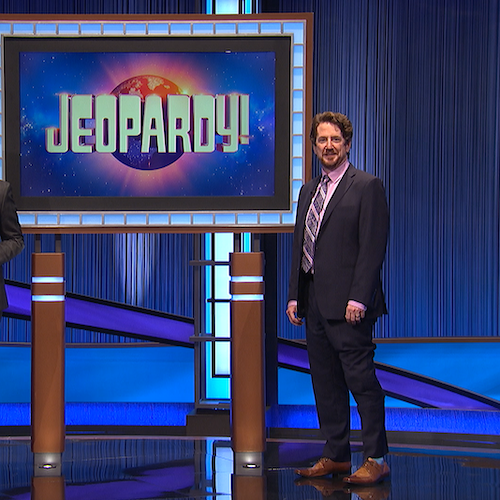 Your clue is… The Yale faculty member who competed on “Jeopardy!” Answer: Who is Alfred Guy?

A wiz on quiz shows, Guy is better known as the Poorvu Center’s Director of Undergraduate Writing and Tutoring, Yale College Assistant Dean of Academic Affairs, and the college’s R.W.B. Lewis Director of Writing.

The following is an excerpt from a New Haven Register interview:

Guy said the most enjoyable part of being on the show was talking with the other contestants.

“I was very very pleased with how much the contestants root for each other. In a show where [you win by getting] questions right, I could see sometimes the other contestants being like ‘Wow!’ instead of like ‘Damn!’ and that surprised me,” Guy said. “I didn’t think there would be so much comradery.”

Guy was also impressed with how much the staff cared about the integrity of the game.

“On Jeopardy! you can see that because [the show’s staff is] aware of their visibility they want to make sure that every part of the show is done with triple checks. It was really obvious to all of us contestants; we enjoyed talking about that part in the breaks in between meetings,” Guy said.

The professor has previously competed on “Who Wants to be A Millionaire” and “Are You Smarter than a Fifth Grader,” which he said he enjoyed but did for financial reasons. Guy said he didn’t join “Jeopardy!” for the money but for the experience, seeing it as the “Olympics” of game shows.

“I enjoyed [‘Who Wants to be A Millionaire’ and ‘Are You Smarter than a Fifth Grader’] because you are the star of the show. I am probably more charming than I am smart, so I know I would present on those shows as a winning guy,” Guy said.

Guy says he found his love of education when he started reading books for fun as a child. He began teaching during the second year of his graduate program in English and found that he really enjoyed it. His interests also include rhetoric, composition, American science fiction, teaching and learning theories, and fantasy.

“My best friend in fourth grade happened to be someone who read books,” Guy said “I was a little bit of a science fiction nerd. You see it portrayed in the media as alienating, but it’s also kind of a club. You belong with other people who like ‘Lord of the Rings.’”

The professor is currently teaching classes including Writing Seminars, Writing the Modern Essay, Science Fiction, The Teaching of English and Fantasy in Literature and Film.

“I think the main thing that I bring to students is that I demonstrate and talk about the belief that thinking about things makes them richer, rather than drains all the life out of them,” Guy said. “The payoff is being a deeper person, it’s pretty gratifying that most students get to that place in my classes.”

And his students teach him a lot as well, he said.

“I’m not so wise to think that saying what I think is that valuable. I am very eager to draw [out of] people their insights and guesses and things they know better than I know” Guy said.