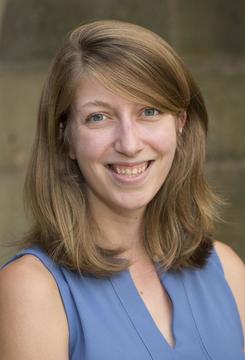 Gina, who earned her PhD in Medieval Studies from Yale in 2020, is the Assistant Director of Graduate and Postdoctoral Teaching. At Yale, she has taught courses on “literary liars” like Cyrano de Bergerac, Chaucer’s “hendy Nicholas” and Shakespeare’s Iago, as well as the modern essay, featuring writers like Jhumpra Lahiri and Tom Wolfe. She received her MA in English from Purdue University, where she taught introductory writing through a variety of lenses, from monsters and heroes to research in the university archives. While at Purdue, she also taught in first-year learning communities, an abiding interest which she continued at Yale through her work as a coordinator of the Silliman College Graduate Affiliate program.

Gina’s dissertation research focused on the ways that reputations are made and broken in Middle English literature, and her work appears or is forthcoming in The Journal of English and Germanic Philology, The Chaucer Review, and Medium Aevum, among other venues. She is especially invested in object-based learning and digitally engaged pedagogy, having led workshops on digital editing and medieval manuscripts at Yale, University College London, and the University of Toronto, and elsewhere. An essay of hers on object-based learning and belonging in the undergraduate classroom will appear in Teaching Gradually, a collection under contract with Cornell University Press (ed., Derina Samuels and John Wyatt Greenlee). In Fall 2017, Gina co-curated an exhibition of manuscripts entitled “Making the Medieval English Book” at the Beinecke Rare Book & Manuscript Library. She also designed digital programs for a 2018 Mystic Seaport Museum exhibit on the Vinland Map.