HomeStrategic Resources & Digital PublicationsTeaching with TurnitinCategories of Source Misuse, and How to Address ThemFlagged by Turnitin: A Student Paper from Another University

Flagged by Turnitin: A Student Paper from Another University 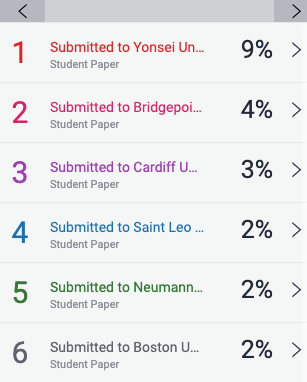 If Turnitin flags a passage in one of your students’ paper as, say, a 4% match with a paper submitted at another institution, it is highly unlikely that the two students collaborated on such a small portion of the paper. It is far more likely that your student read the same source as a student at another school and that both failed to paraphrase it effectively (or perhaps failed to cite the source altogether).

Though Turnitin will not show you the text of a paper submitted at another institution, you can usually find the text of the source they read in common by excluding the match with the other student paper. To do this:

Turnitin will then connect the flagged passage to the source with the next highest percentage of similarity, which is likely to be the common source both students read and didn’t sufficiently paraphrase.

Because it reflects language copied from a common source, a low-percentage match between a passage in your student’s paper and a paper submitted at another school isn’t an instance of unauthorized collaboration—as it may initially seem. If your student has cited the published source somewhere near the flagged passage, you’re probably dealing with a too-close paraphrase. If the flagged passage isn’t accompanied by a citation, the issue is more likely a source used without attribution.